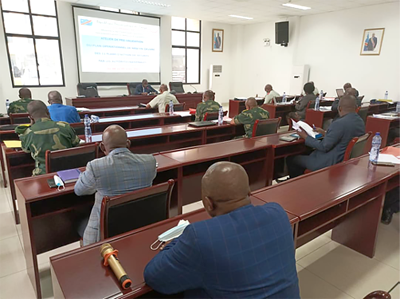 Participants at the Kinshasa national workshop for the validation of the local security plans, March 2022. These workshops, organised by the National Ministry of Interior, involve various national structures and make them aware of the challenges that local administrators and their communities face.

‘It is exciting to see that local administrators are engaging on two levels to address security challenges in their zones. They engage with the population in order to gain their trust and they work with higher level government to move their agendas forward.’ 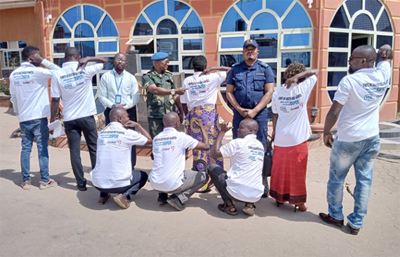 Group photo in Ituri province after the installation of the complaints mechanism for concerned citizens.

‘% of local security council members (incl. civil society) that confirm that the causes and consequences of security problems have been well defined by the local security action plan and [believe it reasonable] that [the identified] actions are able to eliminate these’.

and Migration by strengthening democratic

For several decades the Democratic Republic of Congo has been immersed in cycles of violence, which have had a brutal effect on the social, political and administrative fabric. Since 2016, VNG International has built a team in the DRC which focusses on addressing the root causes for conflict at a local level. Furthermore, it supports local authorities in bringing these challenges to the attention of provincial and national authorities. The vast dimensions of the country, the long distances and the divides between the eastern part of the country, which has faced the brunt of the violent conflict over the past decades, and the capital city of Kinshasa at the western side of the country, all have contributed to fragmented political and administrative response to the conflicts.

The objective of ESPER is to contribute to stabilization through promoting and improving security and justice governance as well as social cohesion in the eastern DRC. Congolese (local) authorities and civil society organizations are actively contributing to these processes. The programme supports the conception and implementation of so-called Local Security Action Plans (PAS). Together with local chiefs and administrators, relevant actions are identified for follow up at higher levels of government. This includes, among other issues, the treatment and payment of government officials, the widespread issue of ‘harassment’ and illegal taxation along provincial transportation arteries.