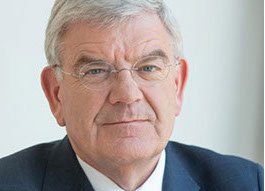 ‘I wish to underline the value and the positive and constructive nature of our collaboration over the past years. This has enabled us to commit to the continuation, or renewal, of our partnership, and has made the engagement between VNG International, the Ministry and our Embassies even stronger.‘
Mr. Lex Gerts, Deputy Director of the Stabilisation and Humanitarian Aid Department, in the IDEAL Final Conference, December 2021.

We believe that next to capacity building of local governments, also the legal and policy environment must be improved to create a conducive environment for effective local government. The international community, including donors, can play an important role in this respect. That is why we use our practical experience and insights from projects as an input for our contribution to policy development at international level, often through the local government networks of which we are an active member.

The President of the VNG and Mayor of The Hague, Jan van Zanen, continued to actively contribute to the UCLG agenda and organisation, through his co-presidency. He presented an outline of a UCLG-CIB policy paper on Development Cooperation & Local Governments, one of the priority topics of his co-Presidency. Van Zanen also participated in the UN’s High Level Political Forum on Sustainable Development, advocating for continued attention for the SDG agenda, following the global health crisis. At the UCLG world council meeting, UCLG members decided on a rotating Presidency for 2022, which will lead to Van Zanen chairing the UCLG world congress in Daejeon (South Korea) in October 2022.

Moreover, Jan van Zanen launched the third edition of the UCLG Peace Prize, at a hybrid event, hosted in The Hague, following the new partnership between the Prize and the City.

The UCLG’s Capacity and Institution Building (CIB) Working Group, chaired by VNG International, gathered over 70 local government development cooperation professionals in its online 2021 annual meeting, virtually hosted by the Federation of Canadian Municipalities (FCM).
In 2021, together with the Institute of Development Studies and in close coordination with international partners inside and outside its network, CIB developed a research paper on the role of local governments in development cooperation. Together with the UCLG GOLD team, the working group produced guidelines on Voluntary Subnational Reporting, which supports LGAs around the world to report on the progress of the Sustainable Development Goals implementation. CIB furthermore published its practical study on gender equality at the local level: Understanding the environment and learning from good practices, and produced a guideline on how to do your Monitoring and Evaluation successfully in times of distant working.

VNG International provides the secretariat and expert support for the UCLG Peace Prize. This triannual award celebrates successful local government initiatives in preventing conflicts, building bridges and dialogue after conflict and promoting peaceful coexistence. In 2021 the third edition of the UCLG Peace Prize has been launched together with our new partner, the Municipality of the Hague. This launch marked the start of the application period for the 2022 edition. This edition of the prize will be awarded at the 2022 UCLG World Congress in the Korean city of Daejeon.

With the PLATFORMA network, the pan-European coalition of 30 local and regional governments and their associations active in decentralised cooperation, we closely monitored the developments related to the new EU Multi-annual Financial Framework and the first steps with regards to programming for the next years. The new instrument NDICI (Neighbourhood, Development and International Cooperation Instrument) provides for (budgetary) space for working with local and regional governments in partner countries of the EU, but preferred modalities for this cooperation remain unknown for the most part. PLATFORMA and VNG International jointly tracked policy files (e.g. SDG agenda, gender, Eastern Partnership). We also signed a new strategic grant agreement (SGA III), that facilitates the continuation of this policy work and our SDG activities in The Netherlands and abroad.

On the 1st of January 2022, a new d5-year partnership programme with the Minister for Foreign Trade and Development Cooperation started. This programme, named “Sustainable Development through Improved Local Governance (SDLG)”, is part of the newly established strategic partnership between the Ministry and and VNG International. It is the first time that 4 different thematic departments within the Ministry are involved in one programme with us, with the purpose of reducing bureaucracy and increasing cross-sectional learning.

Besides the collaboration with the Ministry’s four thematic departments
(i.e. (1) Security and Rule of Law, (2) Migration, (3) Local Revenue Mobilization and (4) Water), we have intensive contact with the Embassies in the current 8 target countries (Burundi, Iraq, Mali, Mozambique, Palestine, Somalia, South Sudan and Uganda). As part of this strategic partnership, VNG International will engage into regular policy dialogues with the Ministry, where alignment will be sought on topics related to the local government sector in various international arenas where both parties are active. To mark the start of this partnership, a kick-off event where the chairperson of VNG, Mr. Jan van Zanen and Minister Liesje Schreinemacher will come together has been scheduled in the summer of 2022.

Based on an agreement with the Ministry of Foreign Affairs, covering February 2020 – December 2021, VNG International organised various sessions to promote and support the cooperation between Dutch municipalities with a partnership in China, and to discuss several sensitive topics related to these partnerships. As a result, more regular communication and coordination between the various Sino-Dutch municipal partnerships has grown.

Congress of Local and Regional Authorities to the Council of Europe

We continued our support to the municipal members of the Dutch Delegation to the Council of Europe’s Congress of Local and Regional Authorities. During its meeting in October 2021, Congress discussed the results of the monitoring of the implementation of the European Charter of Local Self-Government in the Netherlands. Key issues are inter-administrative relations and financial relations between the State and local governments, and the impact of the decentralisation of major responsibilities to municipalities in the social domain. Congress expressed its concern about the financial situation of Dutch municipalities. During the municipal elections of March 2022, Congress organized an election observation mission to the Netherlands of which the results will be presented by the end of 2022.

Dutch members of the Congress participated actively as rapporteurs on several relevant topics. Mayor Harald Bergmann started working on the third volume of the Human Rights Handbook for Local Elected Officials. Mayor Wilma Delissen has been appointed as rapporteur on the topic of fake news and hate speech. In April 2022 mayor Bergmann participated in the monitoring of the state of local democracy in Sweden and later in 2022 in Croatia. Alderman Brigitte van den Berg presented a booklet on the Sustainable Development Goals, as a way to involve children in the SDGs.

VNG International is an active member of the Development Partners Network on Decentralisation and Local Governance (DELOG). In 2021 we have shared our experiences on local taxation in Ghana and our approaches to inclusive governance as developed under the IDEAL programme. In March 2022, we contributed to the conference on ‘Urban Governance, Social Inclusion and Fragility in the MENA Region’. Furthermore, we have been asked to comment and contribute to the updating process of USAID’s decentralization policy. As the main funder of the network, BMZ – Germany, is pulling out after financing it for over ten years, the network is currently looking for new ways to sustain itself. VNG will remain an active partner and will contribute where possible as the network offers unique possibilities to exchange with development partners and other implementing organisations.

Almost 120 Dutch municipalities participate in the still growing VNG network of Municipalities4GlobalGoals. It is a lively community of practice, which we support with advice, publication of guidelines, and by facilitating the exchange of best practices and the organisation of events. On the occasion of the municipal elections in March 2022, VNG launched an appeal to the newly elected councils to use the SDGs as a reference or compass in defining the policy priorities for their new mandate. In 2022 the Netherlands presents its Voluntary National Review on the implementation of the SDGs in The Netherlands to the UN High Level Political Forum (HLPF). VNG provided input, but we also produced a Voluntary Subnational Review on the implementation of the SDGs by local and regional governments in The Netherlands. VNG President, Mayor Jan van Zanen, is also a member of the official Dutch delegation to the UN HLPF.

Advocacy and Lobbying in projects

Apart from the advocacy and lobbying at international level, many of our projects also include an advocacy and lobbying component at national level, for instance through support to national associations of local governments, who play a key role in creating a conducive institutional environment for effective decentralisation and well-functioning local governments. And specific projects focus on more specific topics. To mention just a few examples: