‘VNG International has been working with us since 2014. Since the start of our municipal work, it has offered us a platform to speak up our thoughts, talk about challenges and problems and develop solutions. It has been voicing female officials and enabling them to make a change.’

‘We are fixing the dysfunction of the decentralization process in Libya caused by successive crises, within a very tight timeframe. This process required quick and resonant reflections and the exploitation of international benchmarks. VNG has shown commitment and responsiveness, and was very supportive and efficient during the process.‘

‘This urban park is the sole entrainement space in Sharguia in particular and the southern region in general .’

‘The projects of CILG VNG International have a real impact on the work of municipalities in Libya. It is one of the leading organizations that respected its commitments despite the challenging security conditions. We continue to collaborate with CILG VNGi because we are aware of the importance of its objectives and the efficiency of their support.’

Between 2019 and 2020, noticeably more women participated in NMCA activities 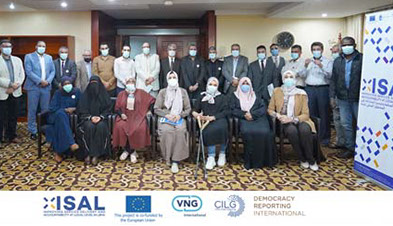 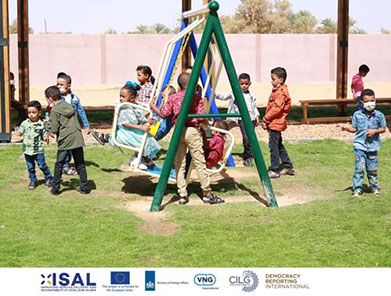 and Migration by strengthening democratic

Despite the complex and highly challenging operational context, VNG International and the Centre International de Développement pour la Gouvernance Locale Innovante (CILG) have successfully carried out activities in Libya since 2012. In 2019, VNG International and CILG started implementing the Improved Service delivery at the Local level (ISAL) programme in Libya, co-funded by the European Union and the Ministry of Foreign Affairs of The Netherlands.

By focusing on the capacity development of Libyan public institutions at the local and national levels, ISAL enables the environment for effective service delivery. In the meantime, developing the capacity of local governments and civil society through joint pilot projects, and engaging citizens by facilitating locally driven initiatives contributes to promoting collaborative governance and extensive participation by the Libyan population in the transition process.

ISAL offers support to different partners and beneficiaries at various levels, namely the High Commission for the Transfer of Competencies HTCT, the Ministry of Local Government MoLG, the Supreme Council of Local Administration SCLA, the Women Elected Officials Network (WEON), the National Municipal Councils Association (NMCA) and 15 municipalities across the country.

The programme contributes to the stabilisation of Libya through an adaptive approach, responding quickly to requests of the Libyan stakeholders, and coping with the changing political and institutional situation.

Key results of the work with the WEON:

Key results of the work with National Actors:

Key results of the work with the National Municipal Council Association:

Key results of the pilot projects: